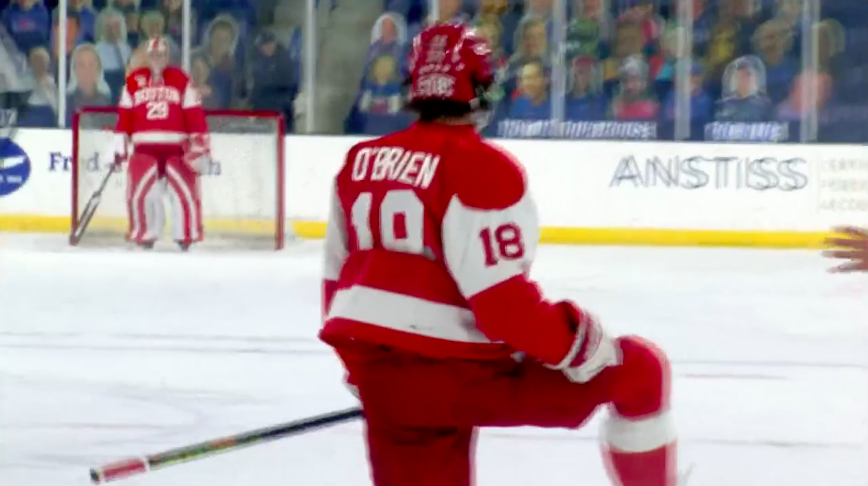 The Philadelphia Flyers are just getting into the thick of their schedule, while some prospects are wrapping up their regular seasons. Boston University sophomore Jay O’Brien is one of those prospects.

The 19th overall pick from the 2018 NHL Draft closed out the regular season the right way on Saturday night. He scored a goal to help Boston University to a 3-3 tie at UMass Lowell. The Huskies went on to earn a shootout victory.

Jay O’Brien blasted home a one-timer on a 5-on-3 power play in the first period.

He set up for the one-timer and made no mistake about it.

A release so quick that even the cameraman couldn’t keep up.

The goal got Boston University on the board and tied the game at one.

It also closed out a pretty strong season for the sophomore. O’Brien finished the regular season tied for the Boston University lead in points (16), led the team in goals (8), and was second on the team in assists (8). That’s fairly impressive in just 14 games.

In terms of the entire NCAA, O’Brien’s 1.14 points-per-game rate was tied for 18th-best among players with at least 13 games played.

You may remember that Jay O’Brien made a big impact a few weeks ago with his first NCAA hat trick. O’Brien is now back on the radar as a Flyers prospect potentially worth talking about. He is back on track after seeming like a bust since being drafted. O’Brien finished the regular season on a six-game point streak with 10 points (five goals, five assists) in that span.

O’Brien’s regular season is now over, but the postseason is about to begin. Boston University will host a Hockey East quarterfinal game on Sunday, March 14th with the semifinals set for March 17th. The final is scheduled for Saturday, March 20th.

Welcome to your new home for Philadelphia Flyers breaking news, analysis and opinion. Like us on Facebook, follow us on Twitter and don't forget to subscribe to PhHN+ for all of our members-only content from the entire Philadelphia Hockey Now crew plus an ad-free browsing experience.
Related Topics:Boston UniversityfeaturedFlyers prospectsHockey EastJay O'Brienphiladelphia flyers
Up Next