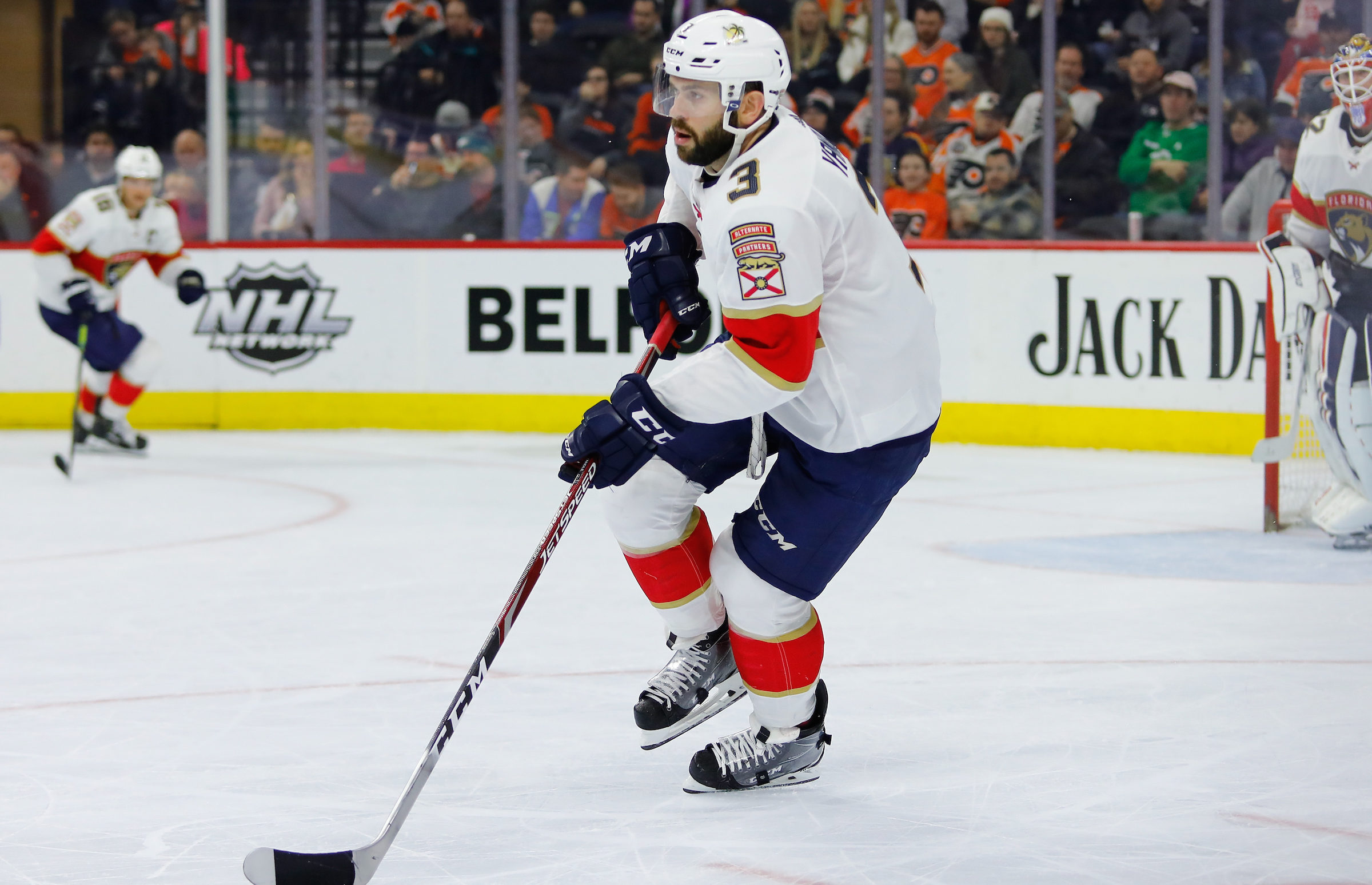 The Philadelphia Flyers defense is going to look a lot different next season. After trading for Ryan Ellis and Rasmus Ristolainen to stack the right side, Chuck Fletcher signed Keith Yandle to a team-friendly one-year deal in free agency. Yandle, a left-handed defenseman, gives the Flyers some depth, a veteran presence, and potential power-play quarterback.

Yandle, who turns 35 in September, was bought out by the Florida Panthers two weeks ago. He had two more years on his contract at a $6.35 million cap hit. Yandle signed a one-year, $900,000 deal with the Flyers on Wednesday.

Getting bought out is usually tough on players, but Yandle took it in stride. In fact, he thinks he’s in an even better situation now.

“I thought it was best case for me. Obviously, when you get bought out, it’s one of those things where it throws a little wrench in your life,” he said. “I knew for me, I’d be able to go into a good team and a low cap hit and be able to help somebody out. I thought that was the biggest thing for me is looking at the bright side of it and put myself in a good situation. Ultimately, that’s what I did.”

Yandle influenced by Hayes as well as Fletcher’s aggressiveness

The veteran defenseman had larger offers elsewhere but left money on the table to come to Philadelphia. His connections to Kevin Hayes and Alain Vigneault were a big reason for that.

“Obviously, with having played for AV and knowing what he can bring to a team, I think that was a big part. Kevin obviously being one of my best friends, a guy that I trained with every day in the summers, and I see him around every day,” Yandle said. “It’s definitely one of those things when you have a friend on another team, we can feel confident. It definitely made it a little easier.”

Chuck Fletcher touched on that as well.

“Obviously, with Kevin Hayes and Keith Yandle, teams have been really trying to recruit him since he was bought out from Florida. There was a lot of interest in Keith,” he said. “Certainly, Kevin was an important part of selling the virtues of coming to the Philadelphia Flyers. We’re very pleased that Keith chose to come here over many other competitive offers and teams.”

Yandle also knows a lot about Cam Atkinson and is excited about the new Flyers forward.

“Cam, obviously, went to [Boston College]. He’s a guy that’s been around, friends with Kevin. I’ve gotten to know him through there and playing against them over the last years,” he said. “When you see a guy like him being brought in, and you know what he can bring to a team, I thought it was a huge trade for Chuck. Definitely excited to play with him.”

But it’s not just about the people and connections. Yandle’s decision was influenced by Chuck Fletcher’s active offseason moves.

“I think seeing what Chuck’s done even before free agency and making moves, making big moves. Just helping the team get better,” Yandle said. “I thought it was a no-brainer for me and being able to see what he did before today and tomorrow and see how active he was. It just seems like it’s a win-now situation and that’s something that I’m all about. I thought it was the best fit.”

Yandle hungry to help Flyers in any way he can

Yandle thought it was the best fit, and some of that is due to the hunger in the locker room. The Flyers weren’t happy with missing the playoffs and are ready to bounce back.

“Obviously, I know the roster and know how big the guys are. I think the biggest thing with him is that the group is not happy with not making the playoffs last year and how it ended. How guys want to come in this year, have a huge year and get back to where you should be,” he said. “I think for me, that’s the biggest thing is to see the hunger in the group and talking to guys and their team and how excited they are for the season to start. It’s definitely a big thing for me as well.”

Keith Yandle brings a great attitude and experience to the Flyers. Prior to signing Yandle, Cameron York was penciled in as the Flyers’ third left defenseman. Now, with Yandle signed, that gives the Flyers a safety net –– not a roadblock.

“I think Cam’s play will dictate when he arrives in the NHL,” Chuck Fletcher said. “What this move does is just give us more depth … We’re going to need a lot of bodies, and it’s going to be an adjustment for the players going back to 82 games and with this type of compressed schedule. I think what we’re trying to do as much as anything is add as many quality players as we can, knowing that you’re going to need a lot more than 22 or 23 players to survive the season.”

Keith Yandle has played in 1025 NHL games in his career, plus 58 playoff games. He reached the playoffs three times with the Coyotes, twice with the Rangers, and twice with the Panthers. He knows what it takes to be a part of a winning hockey club.

Yandle is willing to do whatever it takes to help the team, even if it means breaking his 922-game ironman streak. He’s 42 games of Doug Jarvis’ record.

“I haven’t talked to Chuck about that stuff,” Yandle said of the streak. “It’s one of those things where I’m a team player and it’s all about the team. Like I said earlier, I don’t really think too far ahead. I think for me, it was just getting the best fit for me and a chance to win. Ultimately, that’s why I went with the Flyers.”

With Yandle in tow, the Flyers projected defensive pairs make a lot of sense. Yandle is a puck-moving defenseman that, in theory, should complement the defensive-minded Justin Braun on the third pair.

Up top, the Flyers will have Ivan Provorov and Ryan Ellis. Ellis is a Matt Niskanen-type that should elevate Provorov’s game and give the Flyers a legit top pair.

Travis Sanheim and Rasmus Ristolainen may be the pair with the most question marks given the situation. Sanheim was up-and-down last season and Ristolainen is looking for a fresh start in Philadelphia. They could work very well together, or they could struggle and force some changes.

Yandle and Braun are two veteran defensemen with over 1,700 career games between them. Those miles could wear them down, though. Luckily, the Flyers have the aforementioned York as well as Egor Zamula waiting in the wings. They also signed a few depth defensemen in free agency and extended Samuel Morin.

Ellis is the headliner, Ristolainen is a wild card, Atkinson is a solid pickup. Yandle’s team-friendly deal flew a bit under the radar but could end up paying huge dividends.

Yandle just came from a really good team! Nobody else wanted him.

[…] Keith Yandle couldn’t be more excited to be in Philadelphia and the Flyers are lucky to have him. “It was a no-brainer for me.” (PHN) […]

[…] “I thought it was best case for me. Obviously, when you get bought out, it’s one of those things where it throws a little wrench in your life,” Yandle said in a story published at PhiladelphiaHockeyNow.com. […]

[…] Philly: Keith Yandle struck a “show me” deal with the Philadelphia Flyers after the Florida Panthers paid him to leave. Offensive defender Yandle says it was a “No headache” to sign with the Flyers. […]

[…] Philadelphia: Power play specialist Keith Yandle says it was a “no brainer” to sign with Philadelphia. […]

[…] Yandle‘s iron-man streak is now on the line in Philadelphia. The Flyers signed the soon to be 35-year-old defenceman to a one-year deal on Wednesday worth […]

[…] Philadelphia Flyers are starting to resemble a summer pick-up league with NHLers in Boston. (Philly Hockey Now) Did the Avalanche actually get better by losing Philipp Grubauer in NHL free agency and replacing […]