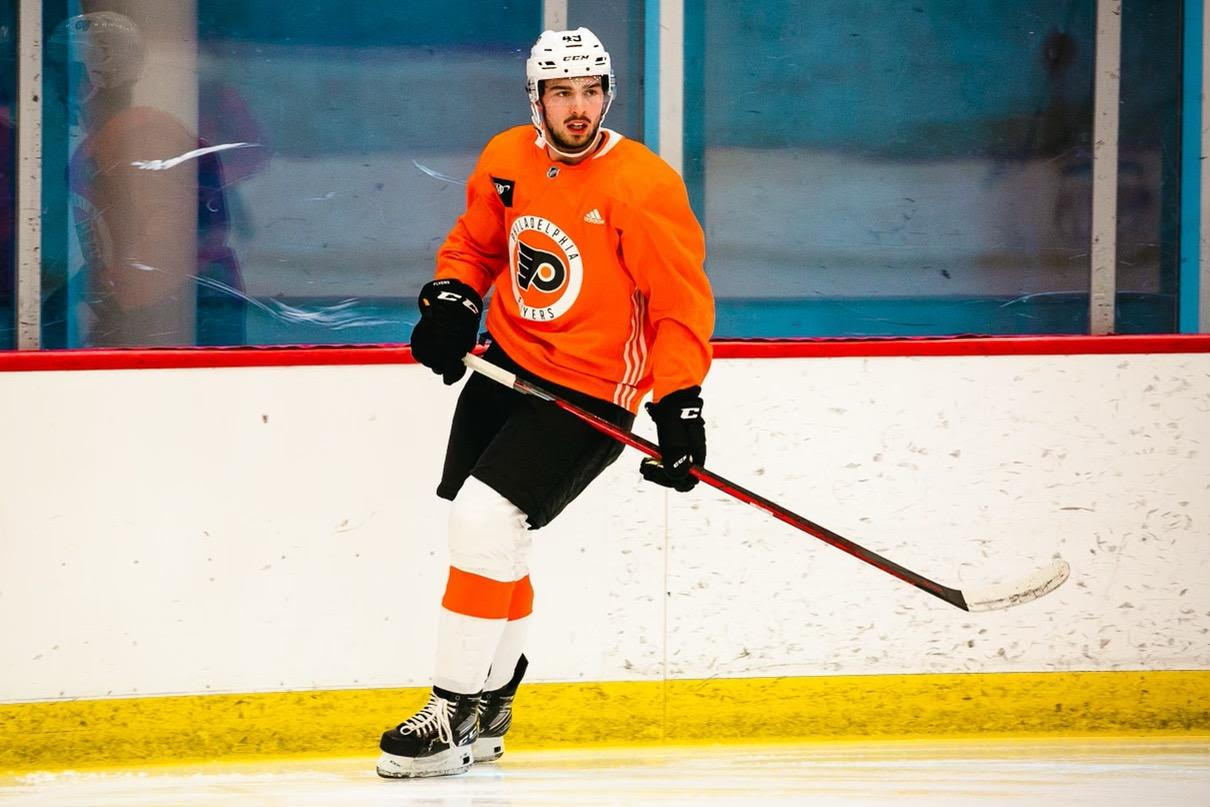 They continued their nosedive Sunday as they lost to the visiting Buffalo Sabres, 5-3, for their fifth consecutive defeat.

You know things are going bad when color commentator Steve Coates starts talking about Dobie Gillis, Bob Denver, and Gilligan’s Island early in the third period as a distraction from the game.

The Flyers now have losing streaks of 13, 10, six, and five games this season, so you can understand why Coatesy is looking for a diversion.

The Sabres swept the home-and-home series on consecutive nights. They also swept the three-game season series, outscoring the Flyers, 15-9.

“There should be motivation. It’s the NHL,” center Kevin Hayes said. “We get paid millions to show up and perform at our job. If you can’t find motivation, you shouldn’t be on the ice.”

With 5:53 left in regulation, the Flyers got to within 4-3 when Zack MacEwen (third goal) scored after being set up by Oskar Lindblom.

No matter. Buffalo later iced the win with an empty-net goal.

Cates, 23, made it 2-2 when he jammed in a Travis Konecny shot with 18:40 left in the second. That gave him five points (three goals, two assists) in 10 NHL games since he signed an entry-level deal after a terrific career at Minnesota-Duluth.

In the two weekend losses to Buffalo, Cates had a total of three points. He had the first multiple-point game (goal, assist) of his young career Sunday.

“Just getting more comfortable with the guys, the systems, trying to make more plays,” Cates said. “… I think I’ve gotten more comfortable and have been holding onto the puck a little longer and making some plays.”

But Buffalo, just like it did in Saturday’s 4-3 comeback win, dominated the second period. Before the period ended,  Victor Olofsson (two goals) made it 3-2 with a shot off Felix Sandstrom’s glove. That made the Sabres a ridiculous 7 for 10 on the power play in three games against the Flyers this season.

Tage Thompson (35th goal) then increased the lead to 4-2 by rifling a shot high into corner of the net.

In their last five games, the Philadelphia Flyers have been outscored, 13-2, in the second period, including 6-2 against Buffalo.

Things started on a positive note for the Flyers. Hayes scored 76 seconds after the opening faceoff, and Cates collected the primary assist. Cates started on a line with Hayes and Konecny.

Hayes scored his ninth goal of the season as his backhander trickled past Dustin Tokarski, who once played for the Lehigh Valley Phantoms.

A little over seven minutes later, Olofsson tied it on a power-play goal.

With 2:26 left in the first, Anders Bjork gave the Sabres a 2-1 lead, scoring his first goal in 28 games after a poor line change by the Flyers. Defenseman Rasmus Dahlin had his second primary assist of the period.

The Flyers had a 17-10 shots advantage in the first, but left the ice trailing.

Philly starts a two-game road trip Tuesday in Toronto, then plays Thursday in Montreal. The Flyers have six games remaining, including two at home — Sunday against Pittsburgh, and April 29 against Ottawa.

You may want to watch a Gilligan’s Island rerun instead.

Sandstrom, who wasn’t at his best in the first two periods but was strong in the third, is now 0-2-1 in his NHL career. … On the power play, Buffalo was 2 for 2, while the Flyers were 0 for 2. … Hayes had his seventh multiple-point game of the season and now has 101 points in his Philadelphia Flyers career. … Owen Tipett had five shots but was minus-2. … Buffalo will miss the playoffs for an NHL-record 11 straight seasons. … Travis Sanheim had an assist, three hits, four shot attempts, and was plus-2 in a game-high 26:41. … The Flyers had 15 giveaways — seven more than Buffalo. … Harry Bricker, the Flyers’ equipment manager, was recognized Sunday for working his 2,500th professional game Tuesday in Washington.

Welcome to your new home for Philadelphia Flyers breaking news, analysis and opinion. Like us on Facebook, follow us on Twitter and don't forget to subscribe to PhHN+ for all of our members-only content from the entire Philadelphia Hockey Now crew plus an ad-free browsing experience.
Related Topics:5-3buffalo sabresfeaturedFelix SandstromKevin HayesNoah Catesphiladelphia flyersscore
Up Next

Flyers fans are sending a loud message to management