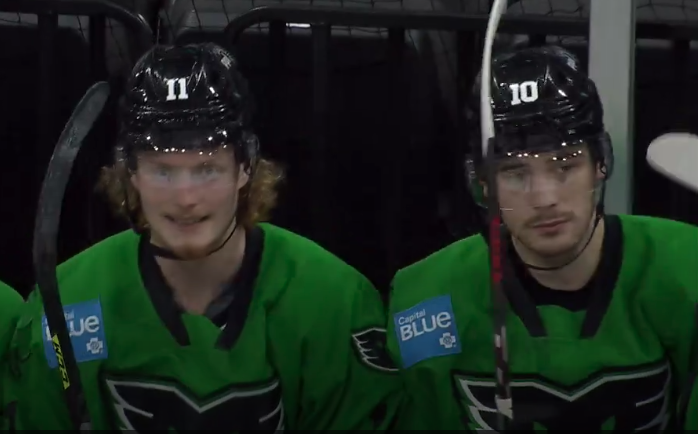 RW Wade Allison (left) and center Tanner Laczynski (right) have a good chance to be on the Flyers' roster next season.

Of all the players who were with the Lehigh Valley Phantoms this season, center Tanner Laczynski — who is trying to get back to speed after surgery to both hips in a six-month period — has the best chance to stick with the Philadelphia Flyers in 2022-23.

That’s the opinion of Phantoms coach Ian Laperriere, who lists injury-prone right winger Wade Allison just below Laczynski, and says that he, too, has a good shot and being on the Flyers’ roster when next season rolls around.

Among defensemen who spent time with Lehigh Valley last season, Cam York has the best chance to stick with the parent team, Laperriere said.

Because of surgery, Laczynski, a former Ohio State standout who was drafted in the sixth round in 2016, played in only 28 games with the Phantoms and collected 17 points (seven goals, 10 assists) after being activated in February.

The Illinois native will turn 25 next Tuesday, and this upcoming season is huge for him.

“When he came back, he was OK, but he’s going to be fine,” Laperriere said. “Do you remember when G and Ghost went through the surgery? It  took them a full year to recover.”

He was referring to former Flyers Claude Giroux and Shayne Gostisbehere.

Laperierre said the 6-foot-1, 190-pound Laczynski will be back to form next season.

“He’s a pro on and off the ice; he’s had injuries, but like I said, that surgery takes a full year (to recover from), and he’s going to be faster next year. I know he’s hungry. Same with Allison. Allison needs to find a way to not get injured. That’s the reality. It’s easier said than done because nobody tries to get injured; he’s just had so much bad luck in the last couple years.”

“He’s a dominant player when he’s healthy and he plays his way,” Laperriere. “When he came back from his first injury for us, he was unbelievable. He was a man among boys. And then he got hurt again and missed so much time and it was hard for him to catch up.”

Laperriere said it’s imperative that the two forwards “have a strong summer and do the right things. I think they have a shot to not only make the team, but to be effective for the Flyers.”

Laczynski, who has 13 goals in 42 career games with the Phantoms, will be given a chance to win a spot with Philly in training camp. If Scott Laughton is shifted to left wing, Laczynski and Morgan Frost figure to contend for a third- or fourth-line center spot.

The Philadelphia Flyers could also make some offseason moves, but they have just $5.1 million in projected cap room, and that’s with money committed to just 18 players, according to capfriendly.com.

PHN: Flyers tell disillusioned fans they feel your pair and to be patient

That means the Flyers need inexpensive players like Frost (needs to be re-signed) and Laczynski (restricted free agent) to make an impact.

The same is true for Allison (RFA), who could end up as a third-line right winger. The Flyers’ group of right wingers includes Cam Atkinson, Travis Konecny, Owen Tippett, Allison, Bobby Brink, and Zack MacEwen (RFA). Brink figures to start the season in the AHL.

Konecny could be dangled in a trade this summer.

Laperierre is also high on late-blooming right winger Hayden Hodgson (RFA), who scored 19 goals in 46 games for the Phantoms.

“He’s my darkhorse to make the Flyers next year,” Laperierre said. “He’s got the confidence that he can play at the next level. I like that. For me, he’s a prototype of the type of player the Flyers want to get back to. He’s physical and hard to play against.”

On the left side, Phantoms winger Isaac Ratcliffe, another RFA, has a chance to make the Flyers out of training camp.

“He’s another kid who has had a taste (in the NHL),” Laperriere. “He has to play a big-man’s game with his body, and he has good hands for a big man.”

As for the 21-year-old York, Laperriere believes “he proved he can play there.” York spent 30 games with the Flyers last season. A natural left-side defenseman, the Flyers experimented with him on the right side for a while.

“He’s a kid who I feel is almost a better defenseman at this (NHL) level because he’s playing with better players,” Laperriere said. “And that’s not the first time or last time that you’ll see that. At the NHL level, there’s less running around.”

Laperriere said defensemen Egor Zamula, Linus Hogberg and Wyatte Wylie “have work to do” before they are ready to stay in the NHL.

Zamula “needs to put weight on. He needs to get bigger and stronger. It’s tough to do in the winter, especially with our crazy schedule,” Laperriere said. “Last year, we had to play 16 games in 30 days, so it’s tough to hit the gym. And he realizes that. He know she needs a good summer of training.”

He said the 6-3, 177-pound Zamula “has the skills, but he needs more speed. He needs to play faster. I love the kid. He has a smile on his face every day. He wants to be a hockey player.”

Hogberg. a defensive defenseman, “opened my eyes” last season, Laperriere said. He plays just the left side, while Zamula can play the left or right.

“There’s only so many offensive (defensemen) you can have on your roster. It’s a big summer for him (Hogberg), too. But it was the right thing to call him up at the end of the year. He deserved it and it gave him a little taste of the NHL and what it’s like. I think it’ll motivate him a little more.”

Wylie, a fifth-round draft selection in 2018, needs to gain some strength and be more consistent before he’s ready. He’s only 22 and is still developing.

“He took a step forward,” Laperriere said. “I’m not saying he’s going to be in the NHL next year, but if he keeps doing the work every year, he’s going to give himself the best chance.”

Ronnie Attard, a righthanded defenseman, didn’t play with the Phantoms. After signing an entry-level contract, the former Western Michigan star went right to the Flyers and played 15 games and had four points and a minus-2 rating. He has lots of promise, but his expected to start next season in Lehigh Valley.

“I watched him on TV and I like what he brings,” Laperriere said. “He’s got size and he’s got an offensive flair; he wants to jump up in the play, and he’s got a good shot. But we know there’s more to that to becoming a regular NHL player. There’s nothing wrong with spending some time in the NHL; it’s only going to make you a better NHL player because there’s a part of you that doesn’t want to go back there.”

Salary-cap limitations may prevent the Flyers from adding a veteran goalie. and Felix Sandstrom and promising 6-foot-7 Ivan Fedotov could battle for the No. 2 spot behind Carter Hart. Sandstrom got better as the year went on “and made those big-boy saves,” Laperriere said. “Look at the playoffs now. You need your goalie to make those key saves.”

Welcome to your new home for Philadelphia Flyers breaking news, analysis and opinion. Like us on Facebook, follow us on Twitter and don't forget to subscribe to PhHN+ for all of our members-only content from the entire Philadelphia Hockey Now crew plus an ad-free browsing experience.
Related Topics:best prospectsCam YorkfeaturedhipHodgsonOhio StatePhiladelphia Flyers. Lehigh Valley PhantomsSandstromTanner LaczynskiWade Allison
Up Next

For Flyers, Trotz and Torts Would Be Great Fits, But Don’t Overlook Another Key Hire

Sam, thanks for covering. But this POV from Lappy and the Flyers is absolutely ridiculous. The Flyers were so bad, and will be, that anyone who performed last season will once again make the roster. They don’t have anymore options. It’s a sea on injured, mediocre prospects. Allison is no longer a “prospect.” Like Tippett. They need to PERFORM not just make the roster or get cut.

Then we hear more about shifting centers to the wing to make room for more centers. OYE.

Then we hear about Tanner Laczynski’s surgery on both hips. Wow.

It is going to be bad for a really long time.

It’s saying a lot that with a slow skating, bottom 4 talent team, the Flyers are hoping that one or two of their top prospects make the team.

I’d appreciate it it they don’t “feel my pair”. Lol

The Flyers are going nowhere fast. They will be lucky to have a Winning Record next year; let alone making the play offs. I predict and can see ALOT of empty seats at the Wells Fargo Center next year. I think the Philadelphia Flyer fans have had enough. Never thought id see the Flyers Organization in this bad of shape as what everyone is looking at right now.

I’ve seen the Flyers forever. In 1969 they lost to the Blackhawks 12-0 but it was expected that a startup team would be bad for a few years. This organization is now a disgrace, They need new ownership. A new coach won’t solve their problems.