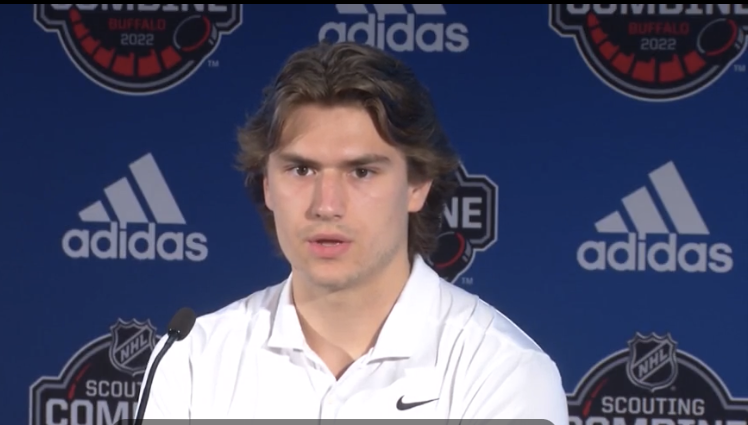 Cutter Gauthier has the size and talent to be playing in the NHL in two years. The center/left winger is on the Philadelphia Flyers' radar.

If the Philadelphia Flyers stay at No. 5 in Thursday’s first round and decide to pick a forward, there are several players they are considering, including center Cutter Gauthier and right winger Joakim Kemell.

The Flyers aren’t expected to select speedy center/right winger Matt Savoie at No. 5, but they would consider taking him if they traded down in the draft, according to an NHL source.

Below are some of the forwards they could select. Center Shane Wright, left winger Juraj Slafkovsky, and center Logan Cooley are not included because they are expected to go 1-2-3 in the first round.

The below thumbnails include an evaluation from Brock Otten, draft expert for the authoritative McKeen’s Hockey.

In case you missed it, here are the defensemen on the Flyers’ radar that Otten evaluated.

The forwards who could be in the Flyers’ system Thursday:

Otten’s evaluation: “He’s a late-season riser. For one, people are viewing him as a center now instead of a wing, and he plays a very pro-style game.”

While McKeen’s panel has the Boston College-bound Gauthier at No. 13, Otten has him much higher.

“It’s not going to take him long to get to the NHL,” Otten said. “He’s not going to need much time in college or in the AHL to be an NHL player. At the least, he projects as a very solid No. 2 or 3 center. … He plays physical, he can play any role. He’s kind of a Swiss Army knife. He’s got a big shot and he can skate. He’s not the most creative player — he’s a very straight-line player — and I think that’s why he’s more a safe bet as opposed to a high-upside bet.”

Otten called him “the type of player you win playoff games with. He’s hard-nosed, physical, quick.”

Gauthier is a “Jeff Carter-type, and maybe a little more physical than Carter. That would be his high ceiling, a best-case scenario,” Otten said. “I think he’s the third-best center in the draft, behind only Wright and Cooley.”

Otten’s evaluation: “The question with is, will his size hurt him at the NHL level? He’s not a bad skater, but he’s probably only average. He had some injury issues this year that slowed down his season. His game needs some development, but the upside is that he’s a really strong, goal-scoring winger.

“He can play the power play, and he’s more physical than people give him credit for and he plays with more sandpaper than a lot of players his size. … But he still needs to add strength. To me, he’s in the top-12 or 13 range.”

“There’s certainly a will there, but he’s not the biggest guy in the world, and there are some projection issues in terms of how well he’s going to get to the center of the ice  whether he’s going to be kept on the perimeter on the NHL level?  If a team sees him as a center, you’re obviously going to put a little more value on him.

“The skill level he has is undeniable. Good skater. Great skills. Good vision. It’s just a matter of how well he’s going to be able to adapt to the physicality of the NHL.”

#Flyers confirm what Vancouver Canucks announced last week: Brad Shaw will be Philly’s associate coach. Fletcher says in statement his “primary” duty will be running the D. He does not say whether he will run the PK, but he is expected to handle that duty.

Otten’s evaluation: “I see him in the same sort of situation as Savoie. You’re looking at someone who is a good skater, but is undersized. He probably fits more on the wing than down the middle. There’s a lot of inconsistencies in his game.

Stats: 7-2-9 in 26 games for Djurgardens in Swedish Hockey League.

Otten’s evaluation: He;’s a good goal-scoring winger, and I think some people look at him and wonder if he’s too much of a perimeter-driven player? Is he going to be able to create in his own chances consistently in the NHL?

“Again, he’s not the biggest player, and also not the quickest. He’s not the poorest skater by any means, but as you know, if you’re small, you’ve got to be almost an elite-level skater to excel in the NHL. And that’s something he’s really going to have to work on.

“He also has one of the better shots of the players available this year’s draft,  and he makes things happen in transition, even without elite-level speed.

“Would I take him in the top 10? Probably not, but when you’re getting into the sort of middle of the first round, you’re not going to find a player with as high an offensive upside as him.”

The Flyers aren’t expected to select the next player, but he has intriguing possibilities:

Otten’s evaluation: “You’d be hard-pressed to find somebody who is more divisive than Lambert in this year’s draft. You either love him or you don’t. He didn’t have a good year. He’s extremely talented and came into the year in the conversation for being one of the top-3 picks, but now people are wondering whether he’ll go in the top 20.

“Is he going to hit that offensive ceiling? The biggest question is, how well will he think the game? I think there were some holes that were taken advantage of at the men’s level in Finland, and the fact he didn’t progress while playing against men… raised questions.

“I would say, without question, Lambert is either the best or one of the top three skaters available this year. But how does he apply that and is the consistency there as well?    I would love to see him play in the WHL next year. I seems likely he’ll come over and maybe that will help his game. But I would be shocked if he was picked high in the drat. I think he’s going to be a guy teams are afraid to pick because there’s that really high-bust potential.”

Welcome to your new home for Philadelphia Flyers breaking news, analysis and opinion. Like us on Facebook, follow us on Twitter and don't forget to subscribe to PhHN+ for all of our members-only content from the entire Philadelphia Hockey Now crew plus an ad-free browsing experience.
Related Topics:availableCutter GauthierdraftfeaturedforwardsJoakim KemellMatt SavoieMcKeen's HockeyNo. 5 pickphiladelphia flyers
Up Next