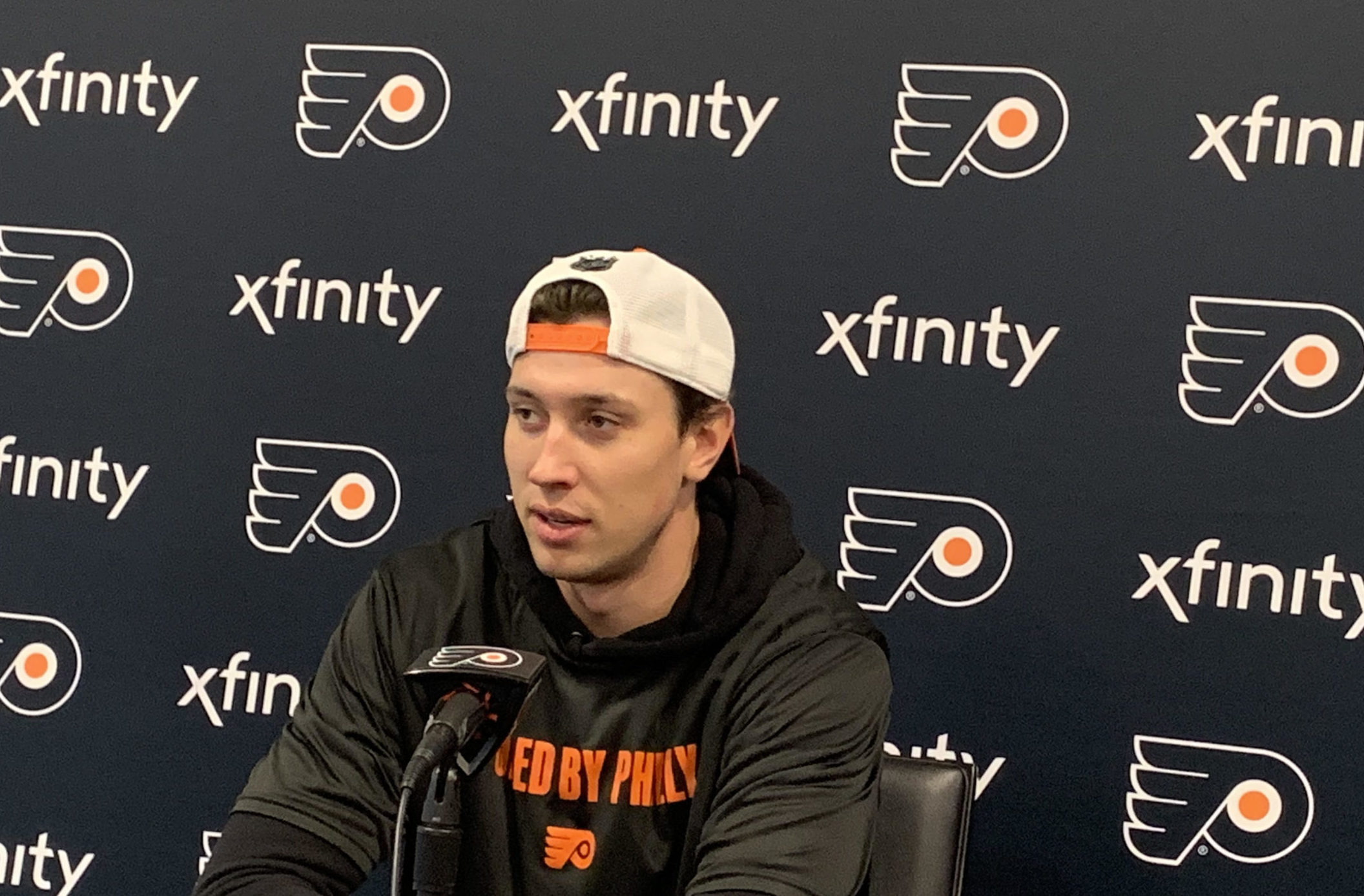 Isaac Ratcliffe’s career is at the crossroads.

If he doesn’t make the Philadelphia Flyers roster and they try to send him to the AH:’s Phantoms, the 6-foot-6, 225-pound left winger would first have to clear waivers.

Other teams may be interested. Ratcliffe provides size and physicality, has good hands, and had a solid 10-game (four points) showing with the Flyers last season.

He is on the roster bubble, especially since the Flyers signed left winger Nic Deslauriers to a four-year contract in the offseason.

Does Ratcliffe feel as if he is not only attempting to win a spot with the Flyers in camp, but also trying to entice another team to take a shot at him if he goes on waivers.

“No, I don’t really think about it that way,” said Ratcliffe, 23, who will make his preseason debut Tuesday in Buffalo, playing on a line with center Elliot Desnoyers and right winger Zack MacEwen. “I’m here to be a Flyer. Whatever it is, I just want to make this team. I mean, I just want to be a Flyer this year. I want to represent what this city represents.

Big #Flyers LW Isaac Ratcliffe would have to clear waivers to go to ⁦@LVPhantoms⁩ . He said he doesn’t feel like he’s trying out for all NHL teams in camp. Video: pic.twitter.com/a4dl1NApoY

“I’ve been here for long enough,” added Ratcliffe, a high scorer during his junior days, “and I’ve been working toward this goal a long time. I want to wear that orange and black.”

Ratcliffe got off to a slow start with the Phantoms last season, then picked up his game in the season’s second half.

“It was a long journey; it’s still a long journey,” he said. “I mean, obviously I’m not up here full-time yet. I’m trying to earn a roster spot here. I just want to bring that (strong play) consistently. That’s what I’ve been trying to focus on.”

Ian Laperriere, the Phantoms coach who will direct the Flyers on Tuesday, liked the progress “Ratty” had in last year’s second half. He also liked the way he played with the Flyers, who signed the left winger to a one-year, two-way contract in July.

“But you have to do it every night, every practice,” Laperriere said. “He proved to everybody he can do it. The moment he can become an NHL player is when it’s in your DNA that he’s doing those plays every night.”

Ron Hextall, then the Philadelphia Flyers GM, gave up a lot to move up in the 2017 draft and select Ratcliffe in the second round (35th overall). He dealt a second-round pick (44th overall), a third-rounder (75th), and a fourth-rounder (108th) to Arizona to make the trade.

None of the players the Coyotes drafted in the deal have reached the NHL yet.

If the Flyers tried to sneak Ratcliffe through waivers, Hextall could grab him.

By drafting Ratcliffe, Hextall went against his usual strategy of stockpiling picks. But he felt so strongly about Ratfcliffe that he made the deal.

“He’s the prototypical power forward,” Hextall said at the time. “He doesn’t quite have the power part down yet in terms of his body. He’s got to put on some weight and add some strength.”

Ratcliffe has done just that, gaining 25 pounds since he was drafted in Chicago.

Now he’s hoping to take the next step.

Welcome to your new home for Philadelphia Flyers breaking news, analysis and opinion. Like us on Facebook, follow us on Twitter and don't forget to subscribe to PhHN+ for all of our members-only content from the entire Philadelphia Hockey Now crew plus an ad-free browsing experience.
Related Topics:2017draftfeaturedIan LaperriereIsaac RatcliffeNic Deslauriersphiladelphia flyersRon Hextallroster spotwaivers
Up Next