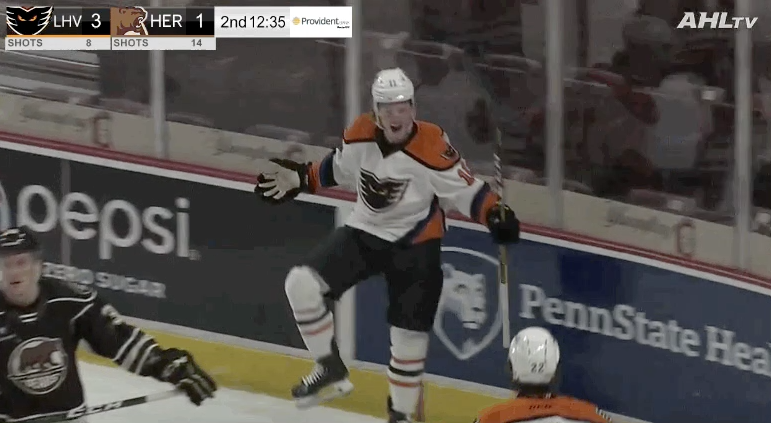 What an afternoon for the Lehigh Valley Phantoms. Philadelphia Flyers 2020 first-round pick Tyson Foerster scored his first professional goal and Wade Allison followed that up with a goal in his professional debut.

The Phantoms went on to beat the Bears 4-1 in Hershey on Sunday, but let’s get to those two highlights.

David Kase rushed down the ice with Foerster on a two-on-one and fed a perfect pass to the rookie.

It was a tough angle for Foerster, but he managed to redirect the puck home.

Foerster is finally on the board with a goal. He picked up his first career point, an assist, in his third game of the season –– and second back from injury –– on March 6th.

That goal tied the game up at one just 42 seconds after the Bears opened the scoring in the early going.

The Phantoms went on to score three more goals, with Allison scoring in his professional debut.

Max Willman kept the puck in at the line, Allison picked it up and sniped his first goal.

Now this is a celly worthy of a first professional goal.

Wade Allison, the Flyers’ 2016 second-round pick (52nd overall), missed the beginning of the season with an ankle injury. He scored 23 points (10 goals, 13 assists) in 26 games during his senior season at Western Michigan last year.

The Phantoms are getting fun again between Foerster, Allison, and of course Zayde Wisdom. And that’s just the top of the list.

Lehigh Valley is now 7-2-2 on the season. They are scheduled to return to action on Wednesday night in Newark against the Binghamton Devils.

Welcome to your new home for Philadelphia Flyers breaking news, analysis and opinion. Like us on Facebook, follow us on Twitter and don't forget to subscribe to PhHN+ for all of our members-only content from the entire Philadelphia Hockey Now crew plus an ad-free browsing experience.
Related Topics:featuredLehigh Valley Phantomsphiladelphia flyersProspectsTyson FoersterWade Allison
Up Next